A new initiative to back British manufacturing and jobs is launching this week across the retail sector.

The ‘Buy the Best, Buy British, Save Jobs’ campaign (19 September – 18 October)  is the initiative of the British Furniture Confederation, a body made up of the industry’s trade associations, and is  aimed at encouraging  shoppers to buy products that are made in the UK. 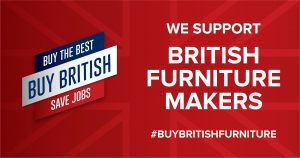 Gary Lasham, CEO of The Belfield Group said: “The Impact of COVID 19 has been devastating on our industry and we welcome any initiative that helps the sector to get back to normal as quickly as possible. In our upholstery businesses, we’ve been making our retail customers aware of the campaign and encouraging them to display the swing tickets on products in their stores. We have almost 2,000 people employed across our Group and they are also promoting the ‘Buy British’ message across their networks.”

“I would like to congratulate the BFC on this campaign and the supporting research that they have compiled which makes for interesting reading. It is reassuring to note that more than three-quarters (78%) of those questioned in their survey said their buying decision would be influenced if they knew buying British would help safeguard 93,000 jobs in the UK.”

Read about the full campaign here

Summary of some of the insights from the BFC’s Campaign