Ben’s Den is a local, Ilkeston-based charity that provides free holidays for families of children with cancer.  They have five caravans on the East Coast and at Tattersall Lakes.  Belfield Home and Leisure support the charity through Troy Smith, Health and Safety Officer, choosing to support them because it is a local charity and also every penny raised goes directly to Ben’s Den.

Troy relates the story of their epic walk:

“Before COVID happened I was planning on walking the Derwent Valley Heritage Way to raise funds for Ben’s Den.  The Derwent Valley Heritage Way is a national trail that follows the River Derwent from Ladybower Dam in the High Peak to the River Trent at Shardlow.  I chose this for the challenge because the route passes Pride Park Stadium, the home of Derby County, and decided to finish at there because Ben was a Derby County fan, and it gives us a round 50-mile route.

“So… fast forward two years, I began re-planning the walk, started asking around if anyone was interested in the challenge and set up a group with around 20 people interested.  We had our first initial meeting in February and set a date for the walk for April 2nd and 3rd 2022.  I decided to give all my weekends and Tuesday evenings up to start training for the 25 mile per day which we needed to achieve. It was suggested that we all booked a hotel in Matlock overnight, which was the halfway point. Belfield had kindly paid for transport originally when I had the mad idea pre COVID, so ‘all’ we needed to do was train for the event.

“On the morning of 2nd April at 05.30, with a cold, frosty, but beautiful start, the bus picked us up and took us the hour and half drive to Ladybower, where we excitedly set off for the first 25 miles.  Everyone was in good spirts and team moral was high.  We had a support bus which I had pre-arranged to meet us at certain points along the way to provide us with food and drink and a ten-minute rests… 15 miles in, members of the team were developing blisters and blister patches were starting to be used in abundance.

“We entered Matlock on day one with an excited atmosphere, rested and ate as a team.  We were ready for day two…

“Day two started at 06.30 with breakfast and me handing out food, premade by my wife for everyone.  Blister patches were re-applied and at 08.00 off we went.  Three miles in we had to pull one guy out with walking difficulties – day two was obviously going to be a challenge.

“By 10 miles morale was low with some team members struggling.  We all pulled together and dug deep to help lift the team.  Then we were informed we could actually finish inside Derby County’s stadium which was amazing and filled us with renewed determination… We trudged along and on sighting Derby the pace quickened, spirits lifted… but blisters were rife.

“Five minutes from Pride Park we stopped, had a group hug and I gave a little speech to the team which reduced most to tears.  We marched into Pride Park with our heads held high, to a gathered crowd of family and friends clapping and cheering us.

“What an amazing weekend with an amazing group of people, completing an amazingly hard challenge… for a fantastic charity.” 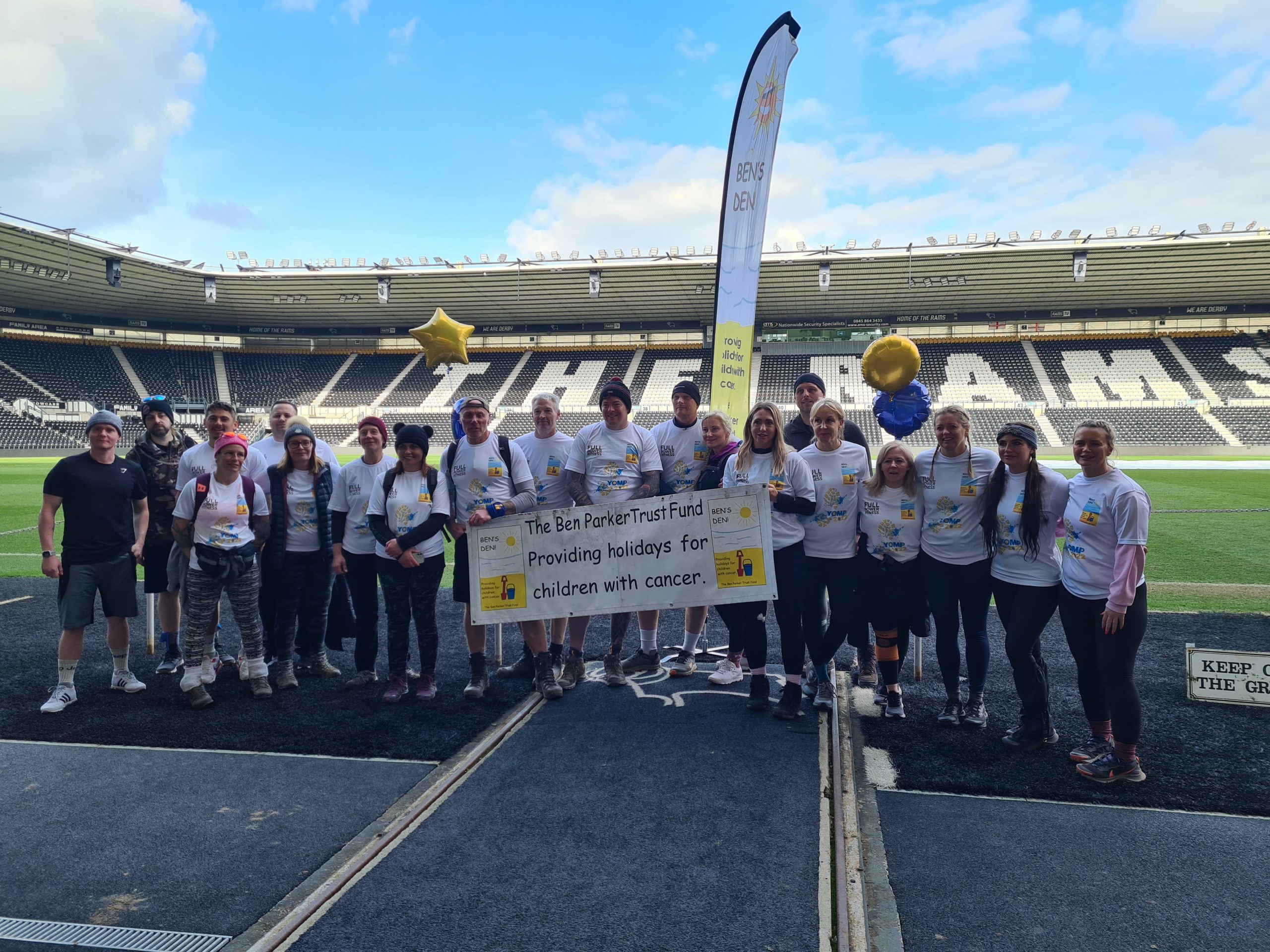